ILGA-Europe report: half of European countries not making progress in LGBT + rights

A new report from ILGA-Europe shows that there has been no improvement in equality for LGBTQ+ rights in 49% of the counted countries. Another disappointing result is that several countries seem to decline for the second year in a row within the so-called Rainbow Europe Index. In terms of respect of human rights and full equality, Ireland scored 52%. This is an improvement of last year’s score of 46%.

Based on six categories, European countries are ranked in ILGA-Europe's annual report. In it, the organization maintains a set of 69 criteria with which, among other things, legislation and policies in 49 countries are examined. The six categories are equality and non-discrimination; family; hate crime and hate speech; legal gender recognition and bodily integrity; civil society space; and asylum.

The countries with the highest overall scores are Malta (89%), Belgium (73%), Luxembourg (73%), Denmark (68%) and Norway (68%). According to the organization, this is the fifth year in a row that Malta has managed to get the top spot. This year, Belgium came in second for the third time. Although the Netherlands once again failed to reach the top ten with a score of 62%, the country, together with Montenegro and North Macedonia, did make the biggest jump compared to last year (+12%). While the UK maintains the same score of 66%, Ireland increased with 6% (resulting in a new total of 52%).

Azerbaijan ended up in the lowest position with only 2%. With just two percent more, Turkey ranked 48. According to the organization, Turkey has been falling in the ranking since 2015, partly due to the increasing restrictions on freedom of assembly and association (for example, prohibiting Pride gatherings). Although Poland still has quite a few countries ranked below them in the list, this year it is the EU country with the lowest score (16%). The country made frequent headlines for its notorious "LGBT-free zones". Hungary caused an international controversy over violations of transgender rights. This partly resulted in Hungary having the biggest drop in the scores, falling more than 8%.

ILGA-Europe has been producing the Rainbow Europe report since 2009, with which the organization maps out the situation for European LGBTI people regarding legislation and policy. The Rainbow Map and Index ranks 49 European countries according to their respective legal and policy practices for LGBTI people, on a scale from 0 to 100%. 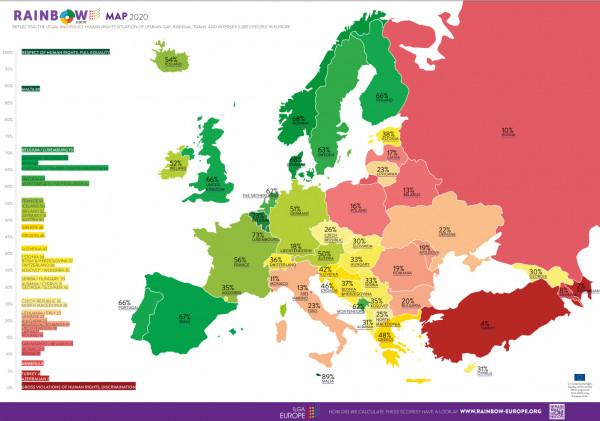